Are you excited about our church basement? The surprising and encouraging story of how RGC’s ground floor came to be finished.

Basements don’t usually stir much enthusiasm, do they? But we have good reason to get excited about the ground floor of RGC’s building, home to our kitchen, basement auditorium, and a bunch of classrooms, and catalyst for so much hospitality, fellowship, training, and good teaching. The story of how our basement came to be finished is one of those Romans 8:28, God causes all things to work together for good, stories complete with a surprise reversal and happy ending. Here’s how it goes.

When our building was first built, there was not enough money to build out the basement. As you heard last Sunday, people had given sacrificially; I’m told that some kids had emptied their piggy banks into the offering plate. Everyone was tapped out, so they decided to delay finishing the basement for a later date. This meant that there was no kitchen to speak of in the building, and hundreds of kids were squished into every nook and cranny for their Sunday School classes. Little did anyone know, however, that the church had a quarter of a million dollars stashed away in the coffers of the Fairfax County Government, which would help get that project started. 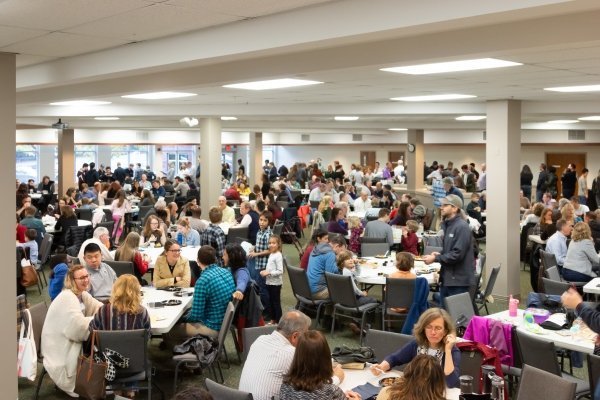 “In 1992, Benny Phillips and the other pastors were divided on whether to file a lawsuit against the Fairfax County School Board.  The school board required churches to pay more money than other community groups to meet in a public school. While our church was raising money to construct our building, we paid for years to meet in Frost Middle School, Robinson High School and West Springfield. Our church had paid about $250,000 more over the years to use the schools than if we had been a nonreligious group.

“We (Jordan Lorence and Jane Sand – did you know she was a lawyer?) offered to represent the church for free to challenge the County’s unconstitutional policy in federal court.  We would ask for the return of the extra money we had paid.  But filing a lawsuit was not something pastors normally do, so some were reluctant. What convinced the pastors to move forward was a word from a visiting pastor from Lake Tahoe, Francis Anfuso.  At the end of his sermon, he said he had a Bible quote that would help direct us in a decision the church was making. He read I Samuel 30:18-19: “So David recovered all that the Amalekites had taken … but nothing of theirs was missing … David brought it all back.” He had no idea we were contemplating a lawsuit to get back the money.

“Jane and I filed the lawsuit in May 1992.  We won an intense battle against a large law firm.  In February 1994, the federal appeals court in Richmond ruled that the policy violated the First Amendment, and that our church was entitled to get back the extra money we had paid the school board.

“The pastors used this extra money to help pay for finishing the lower level of our new church building.  It was bare studs when we first moved in upstairs.  The finished basement has hosted many events, including the wedding reception for Jane and Mark Sand.

“And the court win helped other churches.  One African-American church in Herndon was going to stop meeting because it could not afford the higher rent, when it learned that Fairfax County was cutting its rent in half because of our court win.  Courts in other states have used our victory to eliminate similar discriminatory policies around the nation, allowing churches to pay the same rental rates as everyone else, so they can worship Christ, preach the Gospel and make disciples of our Lord without extra financial burdens.

“This chapter of our church’s history reminds us that we never know how far an act of faithful obedience will resonate for good, far beyond what we can envision.  Like the boy who presented his five loaves and two fishes to Christ, the Lord has used our lawsuit to help many churches in Fairfax County and around the nation.  May we all respond with enthusiasm and perseverance to all things that the Lord calls us to do.” 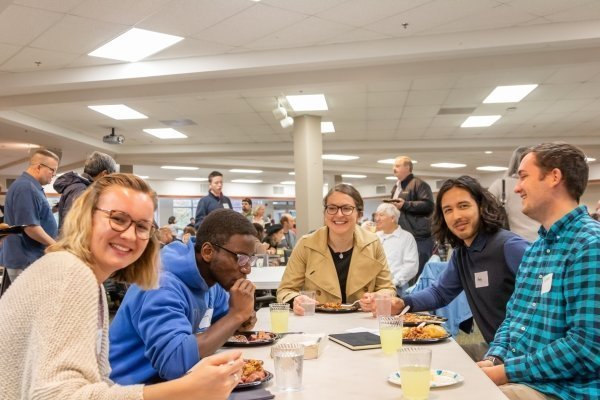 Celebrating our church’s 40th anniversary gives us a window into God’s faithfulness. The need to make those rent payments while also raising money to build a new building must have been quite the struggle for the congregation, compounded by the sense of injustice of paying higher rent than nonreligious organizations. Yet God was up to something that no one could see at the time, a secret savings account if you will, and, as he so often does, he had a plan to bless his people in a way that gave them joy and brought him glory.

Where are you struggling today? Whatever is going on in your life, or our church, the next time you step into our basement, look around and be encouraged that God is always up to something good. We may not see what that is now, but you can be certain a time is coming when you will stop and say, “You had this all along, didn’t you? What a great, wise, powerful God you are!”