In recognition of Black History Month, I’d like to pass along a list of movies and books (movies this week – I’ll do the books next week) that have helped me grow in my understanding of the experience African-Americans have had in our country. I’m not an expert, just a learner seeking to grow in loving my neighbors and brothers and sisters in Christ.

For me, this started when I was ready to enter high school and my family moved from Chicago to San Mateo, CA. Had we stayed in the Chicago area I would have attended an elite public high school that was almost all white. When they picked out a new house for us in California, my parents intentionally chose one that put us into a very integrated high school that was mixture of white, black, Hispanic, and Pacific Islanders. I’m glad they did.

There are a number of ways to deepen this appreciation and understanding, the most important being conversations and relationships. I’ve also found watching movies and reading books to be helpful. The love of Christ compels me not to be passive about this, but to keep working to better understand, and love, my African-American neighbors and fellow church members.

Just Mercy. I recently wrote about this movie (and book), following the story of Bryan Stevenson and his efforts to overturn death sentences given to people in Alabama who were either wrongfully convicted or not given proper representation.

Harriet. This film portrays the remarkable exploits of Harriet Tubman and the Underground Railroad. She was both a heroic abolitionist and a committed Christian.

Emanuel.  I also wrote about this moving story of what happens when a young white supremacist walks into a Bible study in a historic African-American church, pulls out a gun, and kills nine of them. The grief and forgiveness of the survivors makes this a remarkable, deeply impactful story of sin and grace.

42. Jackie Robinson broke the color barrier in Major League Baseball when he played for the Los Angeles Dodgers in 1946. This movie follows his marriage, career, and the difficulties he faced.

Selma. This movie follows Dr. Martin Luther King and many others in their efforts to end racial discrimination in the south and especially to overcome obstacles that prevented them from voting. Their unwavering perseverance and commitment to non-violence are striking. 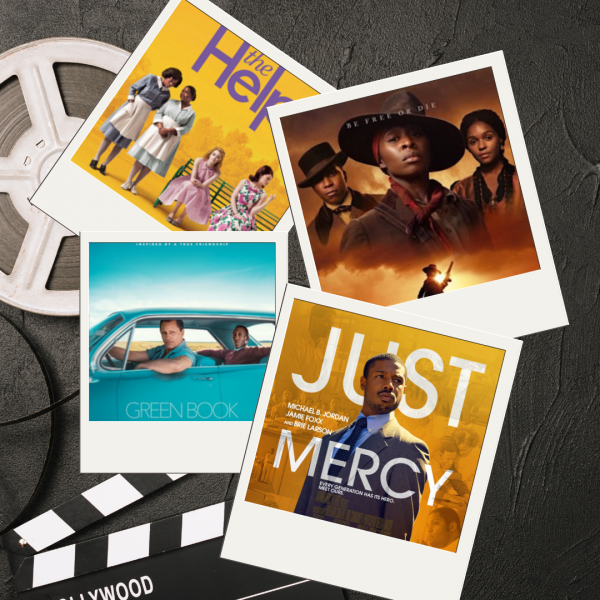 The Help. Viola Davis plays the role of a housekeeper in Mississippi in the 1960’s. This movie provides a window into the experience of many African-Americans who worked hard but experienced numerous obstacles and difficulties, many of which were supported or even created by their white employers.

Loving. In 1958 it was illegal in the state of Virginia for interracial couples to marry. When Richard and Mildred Loving, an interracial couple, found themselves in jail for being married, a series of events unfold which lead to the United States Supreme Court issuing a verdict stating that laws prohibiting interracial marriage are illegal.

College Behind Bars. This Ken Burns movie (in four parts on PBS) follows a dozen or so men and women pursuing a college degree while incarcerated. Their experience makes a case for why education is a vital part of rehabilitating inmates and preparing them to be productive citizens once they return to society.

Green Book. An accomplished African-American pianist sets off on a concert tour in the south in 1962, with a driver and bodyguard who is an Italian American from the Bronx. As they encounter racism and danger, a friendship develops.

Blindspotting. The language and violence in this R-rated movie will understandably keep some from viewing it. Perhaps I was drawn to it because I have a son living in Oakland, CA, where it takes place. This fictional story follows an African-American man trying to make it through his last three days of probation. When he witnesses a white police officer shoot a black man, he is left struggling with how this could happen and how to respond.

I offer these movies not because I agree with everything portrayed in them, but because they’ve helped me grow in understanding the experiences of many African-Americans. I’m coming to understand that history books, general education, and mainstream media have often omitted experiences of African-Americans, or failed to present those experiences from their perspective. These are stories I need and hear and perspectives I want to understand. These movies provide small windows into centuries of discrimination, hardship, sorrow, and death, but also gains and triumphs, and through them I have a growing appreciation for the many deep and vast layers that make up the African-American experience and culture. I’d love to hear from you what movies you’ve found helpful.